Click here for a collection of films from the free kanopy streaming service to help you better understand the history and current events of Ukraine and recent Russian history.

The collection of over 25 films includes:

Breaking Point: The War for Democracy in Ukraine (2016) This documentary looks at people transformed by a democratic revolution, who give up their normal lives to fight a Russian invasion, in a war which has killed 10,000 and displaced 1.9 million Ukrainians.

The Babushkas of Chernobyl (2015) Journey into the Chernobyl Exclusion Zone several decades after the world’s worst nuclear disaster in April 1986. The tightly regulated 1,000 square mile Dead Zone remains one of the most radioactively contaminated places on Earth, but is inhabited by a spirited group of elderly women who scratch out an existence in this lethal landscape.

Use your library card to sign up and watch free ad-free films and series that can be enjoyed on your TV, mobile phone, tablet and online. Start streaming movies today with your public library card or university login.

Borrow the film from the library or watch the movie on kanopy ahead of time and join us for a film discussion on Zoom!

Bombshell: The Hedy Lamarr Story – Austrian actress Hedy Lamarr fled an oppressive marriage to create a name for herself as one of Hollywood’s top leading ladies in the 1940s.Behind the glamour and sex appeal, though, was a talented and inquisitive inventor who created a radio system that is now considered the basis of Bluetooth technology.

Email dobref@wlsmail.org for the ZOOM link – please indicate the title of the program you are registering for. 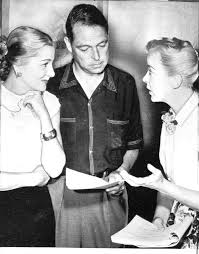 Borrow the film from the library or watch the movie on kanopy ahead of time and join us for a film discussion on Zoom!

The Bigamist – An amazingly sympathetic portrait of a figure historically given very short shrift: the title character is not only a two-timer–he’s a traveling salesman as well. But, as embodied by that perpetually pressured everyman of the 1950s, Edmond O’Brien, the bigamist comes across as a victim of his own sensitivity. Also starring Joan Fontaine and Ida Lupino, and directed by Ida Lupino.

Come join us for a special Women’s History Month program on Tuesday March 29 at 7:00 p.m. on , “Ida Lupino: From Reluctant Actress to Relentless Director,” co sponsored by the Tarrytown, Scarsdale, Pelham and Dobbs Ferry Public Libraries. Registration is required — — click here to register!

Email dobref@wlsmail.org for the ZOOM link – please indicate the title of the program you are registering for.

Check our calendars or sign up for our newsletter for dates and times of our recurring monthly movie series.  Live screenings are held  in the Community Room.

Now 5+ years and running, our popular Cult Classic Movie Night program is shown once a month (usually on a Thursday night) and features films that have developed a “cult” following.  “Cult” films are known for their dedicated, passionate fan base, who form an elaborate subculture – members of which engage in repeated viewings, dialogue-quoting, and audience participation.

Whether live in-person in our screening room or virtually on Zoom after our audience has streamed the month’s movie, our discussions after are always lively, featuring trivia, debates, q&a’s, and plenty of laughs… and you never know who might show up!

Whether they are called Movie Mondays, Friday Films, or Wednesday Matinees, we show a variety of critically acclaimed feature films from the golden age of Hollywood to the streaming age of Kanopy. We have shown film noirs (Too Late for Tears), biopics (Rocketman), and Bollywood (Bride and Prejudice) movies. We show films worth watching and worth discussing.

In the past, we have held afternoon and evening programs comparing books and movies–with refreshments–and watched the literary adaptations of Dashiell Hammet’s The Maltese Falcon, Agatha Christie’s Murder on the Orient Express and William Goldman’s The Princess Bride.

Send us your recommendations and we’ll arrange a screening.  sbramble@wlsmail.org

We love to highlight talented local independent filmmakers who can bring in an enthusiastic crowd.  If you grew up in in Westchester – or even better – one the local Rivertowns (Dobbs Ferry, Hastings-on-Hudson, Irvington, Ardsley) – and have a professional looking film that just needs a little extra push, we host a Local Filmmakers Spotlight program once a year, featuring a screening and Q&A with the filmmaker(s).