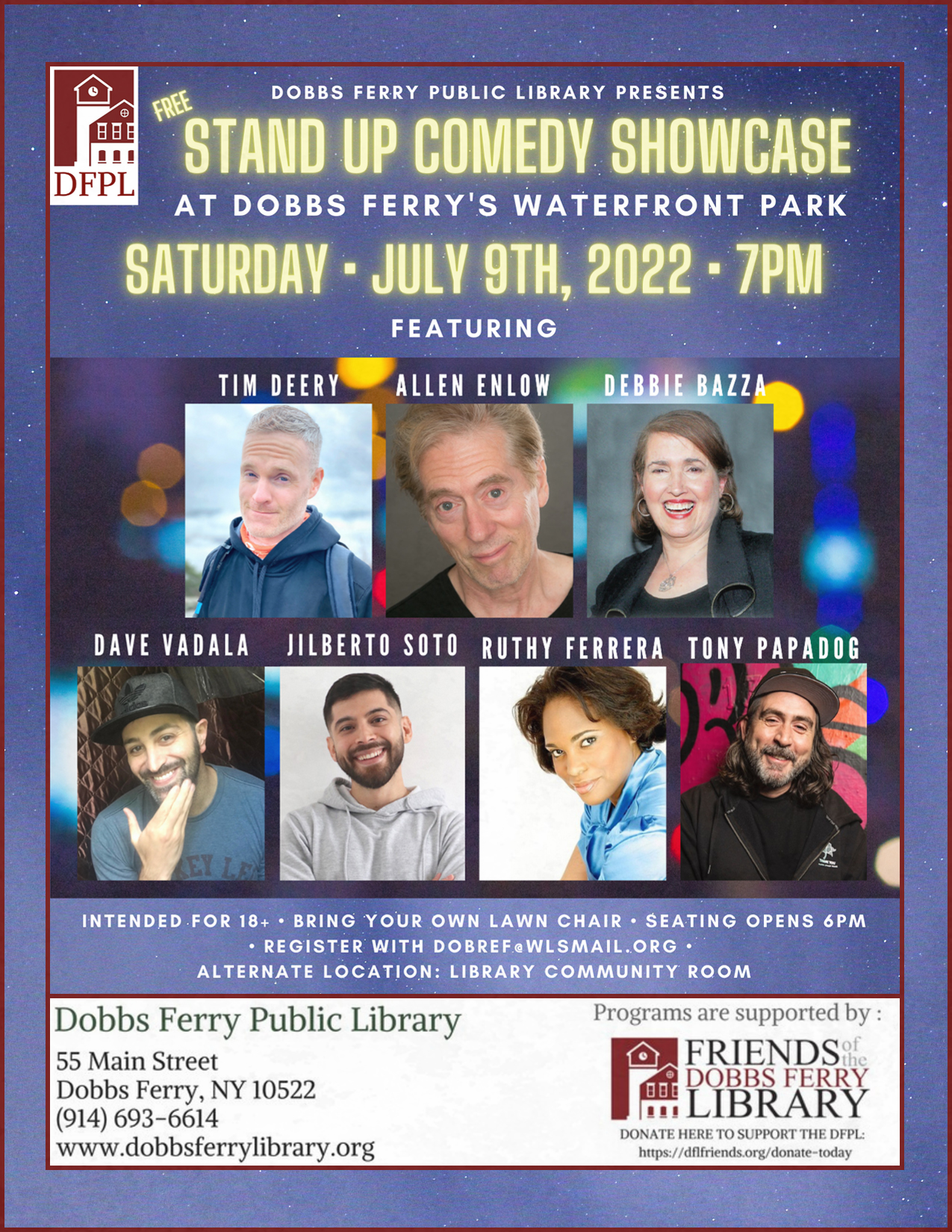 Bring your lawn chairs and join us under the stars for another FREE Stand Up Comedy Showcase (intended for 18+) down at Dobbs Ferry Waterfront Park’s Concert Stage!

FURTHER INFO…
DONATION$
While the event is FREE, we will gladly accept ca$h donations for the performers (who are doing this event free for the library) on behalf of the Friends of the Dobbs Ferry Public Library.
WEATHER (updated 7/9/22 at 12pm)
The weather looks great for tonight, so as such, the show is a go!!!

transportation
address: RR Station 11 Station Plaza Dobbs Ferry, NY 10522
If you are driving: Parking regulations will be suspended between 6pm to 10pm at the Waterfront Park lot thanks to our Village and Police Department.  No special tag necessary.
For any arriving by rail: The park is located right next to the Dobbs Ferry Metro North Hudson Line train stop.
seating
We recommend bringing lawn chairs to sit in.  You are welcome to bring a picnic blanket, but keep in mind the ground could be cold or wet and your view may be obstructed by others who bring chairs.  We will not be providing seating.  The show will begin promptly at 7pm and run til roughly 9pm.  It is an open lawn seating area, so it is recommended you arrive by 6:30pm, as there are no assigned spaces.  Please check in with our staff before 7pm in order to help us verify program attendance.

food + drink
Hudson Social has some great food & drink and is located right across the parking lot.  Please keep in mind that seating gets tight, especially on the weekends, so make reservations if you plan on going (914) 478-3634.  There are also a number of great spots nearby to grab a bite and a brew before or after the show.

restrooms
The public restrooms at the park are open and a short walk north of the concert stage.
filming
This event may be filmed.  Being as such, there is a chance that you could wind up in the recording at any given point.  If this is an issue for you, we recommend that you not attend, as we will not be able edit around individual preferences.

Tim is a performer, producer, and bookman, along with having been a salesman, mailman, and dozens of other man’s, man.

He made up his own college major (Performance Art) and they still let him graduate!  Since, his performances have included solo & sketch shows in Philadelphia, the Hudson Valley, and NYC, opening for Aziz Ansari, The Whitest Kids U’ Know, and more.  His film work includes starring roles in music videos for Wolf Face, Thomas Patrick Maguire, and Garrett Shore’s dramatic short The Matthew Principle.

Allen is an actor, comedian, impressionist, singer, father, and some day hopes to be a functioning adult.

As an actor he has done 1 on 1 scenes with James Gandolfini in THE SOPRANOS and Rami Malek in MR ROBOT. One of these three went on to win an Oscar.

As a Stand-Up Comic, Big Al has opened for Soupy Sales & Joel Grey. He’s appeared on The Joan Lunden Show and headlined in Atlantic City. He also followed Andy Kaufman & Sam Kinison at three in the morning in New York City showcase clubs and lived to tell about it.

Allen has appeared on Broadway but didn’t know it; and Bette Midler “loved” him as a singing sportscaster in a musical that played slightly around the corner from Broadway.

Debbie is a housewife and mother, a goal incessantly encouraged by her family. She’s raised two daughters and survived three marriages, experiences she weaves into her comedy with her signature style.

Debbie can work with all audience groups, including churches, fundraisers, clubs, and was a finalist on ABC’s The View’s “Most Hilarious Housewife Contest.” She is happily doing her stand-up, acting and working as a host.

He was awarded ‘Critics Choice,’ in the 2021 New York Comedy Fringe Festival (where he also won best of the fest!) and has also performed on many festivals including the Fingerlakes Music, Comedy & Cannabis Festival, and the The Big Apple Comedy Festival. Dave’s humor is somewhat limited by his intelligence but in some cases… super charged.

Jilberto is a comic from Seattle who recently moved to NYC. He is corporate professional snob during the day and just a snob at night. His sexual and racial (Mexican) comedic style have often been referred to as personal yet embarrassing, by his older brother.

He performed his debut show “Even God Knew I was Gay and Butterfly” around different fringes (London, Seattle, Brighton, Chicago, Edinburgh) and hosts the popular I Hope This Ages Well podcast.

“He was born to be a comic.” – Chicago Fringe 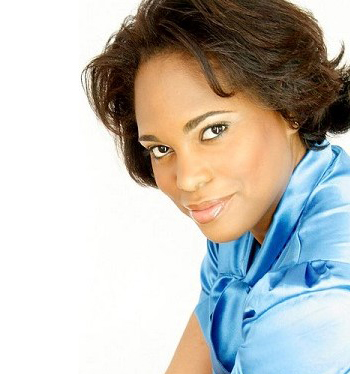 Ruthy Ferrera was born and raised in The Bronx in her mother’s friend’s Living Room, giving her automatic bragging rights to say she was born to entertain.  Ruthy is of Dominican descent and has the perfect command of the “Spanglish” language.

Also, when there was no such thing as direct deposit, Ruthy used to stuff Howard Stern’s paycheck in envelopes when she was employed at then, 92.3 K-ROCK radio station in Manhattan, back in the early 90’s?  Ruthy Ferrera was also the 1st comedian to open the new Copacabana after 40 years of comedy in the iconic venue.  Ruthy can be seen performing at many clubs in NYC.  Don’t be afraid to follow Ruthy on Facebook or IG.  Visit her website at: https://www.ruthyferrera.com/ 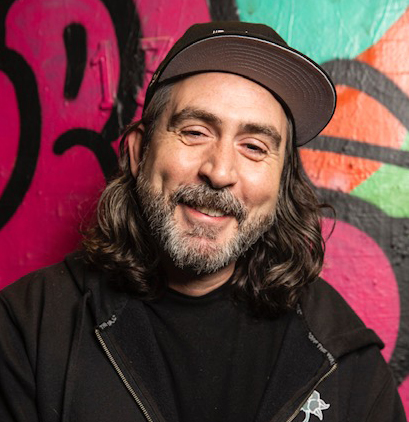 Tony P has been making a name for himself on his way up the ranks of the tristate comedy scene the past few years, both earning his stripes and leaving his mark. A native New Yorker to his core, Tony P’s quick wit, no holds barred attitude, and unique take on life will leave you in stitches. Follow him on Instagram: @Tpapadog or Facebook: @Tony Papadog

These showcases are part of our Comedy on the Hudson Programming.

Please refer to the current CDC guidelines for face mask recommendations.  We will not be policing mask wearing.