Reader’s Circle Book Discussion via ZOOM (Registration) – “The Presidents Club: Inside the World’s Most Exclusive Fraternity” 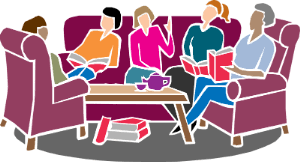 Read ebooks from Hoopla or Overdrive or borrow library books to read ahead of time and join a discussion about a different work every Thursday afternoon.

The Presidents Club: Inside the World’s Most Exclusive Fraternity by Nancy Gibbs

Amazon Best Books of the Month, April 2012: It’s hard to imagine a more obviously fascinating prism through which to look at American history and politics since the end of World War II. Starting with the surprisingly effective relationship of Harry S. Truman and Herbert Hoover, and following through “Obama and His Club,” TIME Magazine’s Executive Editor Nancy Gibbs and Washington Bureau Chief Michael Duffy trace the surprising, complicated story of “the world’s most exclusive fraternity.” Sitting presidents and their predecessors have at times proved remarkably simpatico, at others impossible thorns in each other’s sides. The authors’ extensive research demonstrates that ex-Presidents have a penchant for morphing from consummate team players into irascible rogues, sometimes within weeks, as they strive both to remain relevant and to shape their own legacies. In Gibbs and Duffy’s hands, their stories never fail to captivate. –Jason Kirk